Sonata magnetica (for electric guitar, saxophone, percussions and piano) is a piece inspired by the effect of magnetism and the motion of electric charges. The magnetic field is made evident through gestures, movements and sounds that follow a plot and a predefined structure. When I write a piece, I have in mind movements that produces a certain type of sound, or I think only the movements, or only sounds that come from any acoustic experience: daiy sounds, street or house noise, instrumental sounds and evenof the classical repertoire. In the first part of the piece the instrumentalists take a position in space, moving to generate Sound  using metal objects, cans and magnets to retrace the movement of the charges that attract, repel and align. The sound needs a certain action to be produced. A certain gesture gives a certain sound. Like the magnet that attracts everything, the pieces are created around centric situations where everyone has a degreeof complexity and convergence. “Everything attracts everything” and takes us to a point and a direction and it is also a metaphor for existence: we all follow a direction and at the end we get to a point. The theatricality and the research of sound continue in thesecond part of the piece where the performers head and playtheir instrument. The final part is previously prepared with the instruments and uses a carillon with the aria of Don Giovanni by Mozart“viva le femmine, viva il buon vino”, thinking about the vanity of existence and getting back on track.

In the Cart (4 performers/or percussionists)  for Theater Nature of Darmstadt In this piece, the performers play prepared shopping carts and baskets. The sound is researched in the movement and gesture. For mea musical piece must be seen and listened. Walking, Running, Hitting, Looking at each other produce sound and theater. The four performers will move and joke in the scene. The meaning of this work alludes to the theme of the advertising worldwide and deepens to the concept of sales invading the web, papers, TV, socials etc., influencing our freedom of choice on political, social or cultural subjects. Therefore, does the “man” sell himself or can he be bought?

Ayre (for clarinet in Bb) I experiment with different types of murmurs and sounds that can be produced by the movement of instrument or the body of the instrumentalist. Blowing in every hole like a pan flute, creating  various effects of breath in the thumb hole and working with effects without the mouthpiece: tongue ram, vowels articulation etc.. Alongside these, key clicks, smack effects, percussive attacks that will stretch puffs in building and testing the sound of the piece.

Bokeh (for orchestra) The Bokeh is the photographic technique that allows to have a particular blur in photos and it can  be obtained thanks to the depth of field of  lens on the camera. The term comes from the Japanese word “boke” which means “blur” or mental confusion. The piece tries to develop the idea of depth of field made of texture, continuum’s sound with slight changes of timbre, liquified sound material, inharmonic atmosphere and the idea of an object with defined contour, rhythmic, that pulses. The blur is achieved with the piece color that alternates with the blurred, confused ones, watered down  like a watercolor to the more acidic, more defined ones obtained by filtering techniques. The sound, which travels from one homogeneous situation to inharmonious and roughness dimensions, is achieved through the preparation and instrumentals research. The piece investigates the idea of  the sound, and its main features aren’t so harmonious properties, such as the density, the type of texture, the behavior of the sound itself.

Divertimento (for two performers) The piece  inquires on the role of identity, the struggle between the ego and the superego. The first performer wears a mask that prevents the listener from seeing the movements of the face and mouth. It follows the steps of the performer responding with clucking. The first language by man was clucking, which was the movement of the tongue on the palate,  and it is still used in some regions of Africa. Today there are thirty African ethnic groups that use a series of four or five different clucks. The exploration of these clucks and the desire to use a language that does not belong to our culture anymore and the dialogue obtained by the sounds of the other performer, show the conflict between the ego and superego, the balance between our being and our feelings led some verses of the poem by Aldo Palazzeschi: who am I? 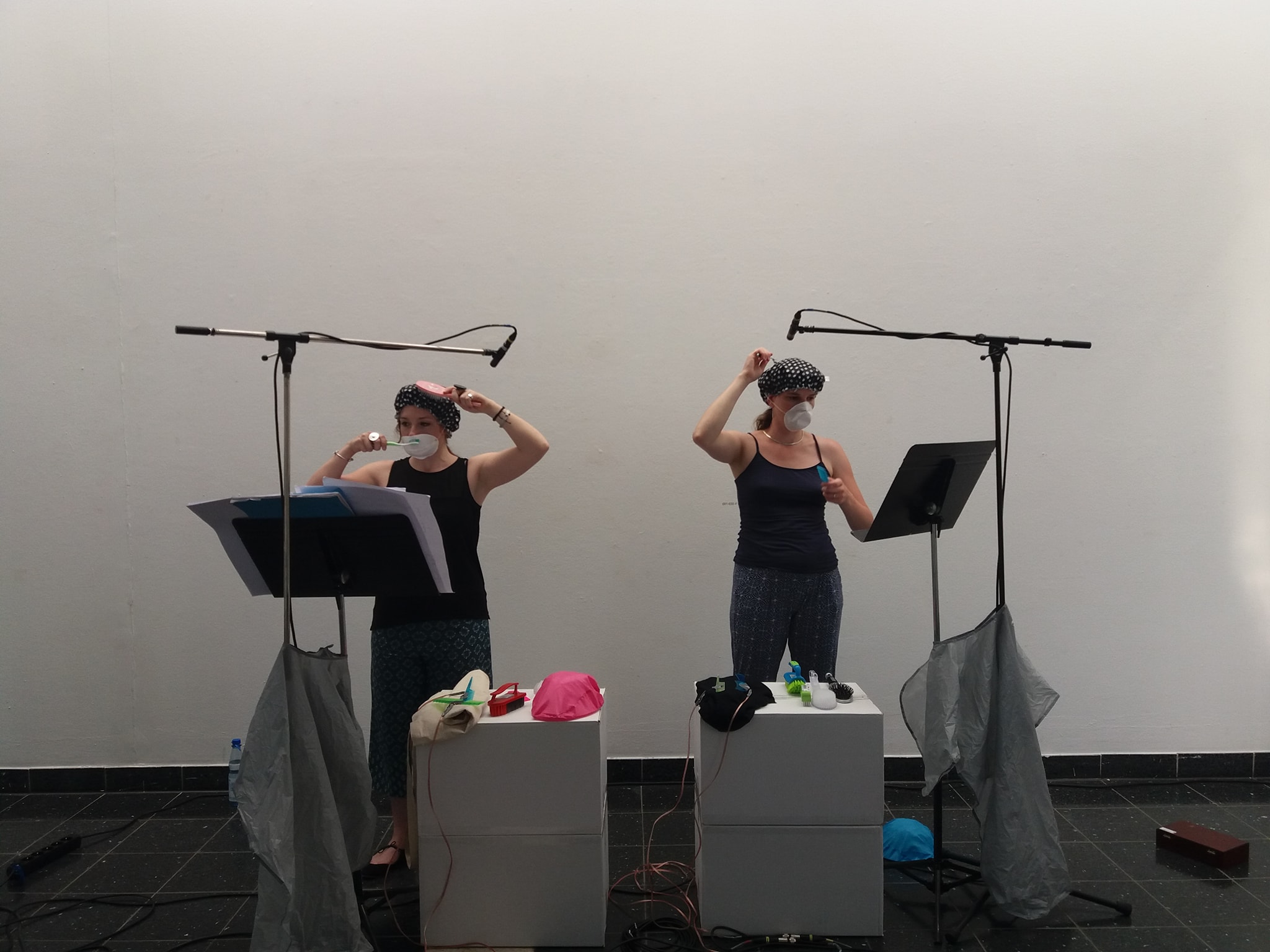 Oberfläche (for two performers) This is a work for two “prepared” performers using different objects to create sounds on the body, though not directly on the skin. Brushing away the negativity, we try to shake off the bad thoughts and emotions. We know more about the surface than that what is deep inside.

Tape x Tape (for a performer, video and electronic) The objects (different sorts of tapes) are played by the performer as instruments, while the electronic / electroacoustic elements  reproduces recorded sounds of tape and manipulated sound. For the diffusion are used loudspeakers, and  transducers are used, installed in boxes to  be placed in the middle of the audience.  The tapes “sew”, repair, connect the sections and unite torn pieces as if these parts were details of our life, joy and sorrow. This merger is usually carried out of necessity, but sometimes it can be a decision. Tapes hold the world together!

Cicli di Con-tatto (for piano) indicates a sequence of continued studies, without interruption, focusing on different techniques of touch. I use the the double-meaning of  the word con-tatto. “Con” is an Italian preposition, “with”, “Tatto” is the sense organ: tact. “Contatto” is contact within the meaning of touch. The pieces are tactile exercises and they have to be performed in different regions of the body of the piano. The exploration travels from its surface to the bottom, which is intended as the inside, associated to its sound. The studies do not want to use the strings of the piano. The instrument has a body and shall be considered like an animal with its mouth shut, which bites the hand that wants to penetrate inside to find the sound.